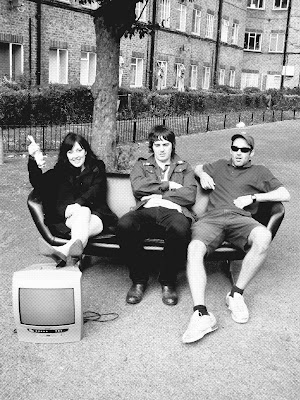 Just to let you know, cos yeah, its been a long time, but Baz is back.
Baz has been, let's say, away for a while., South of the river if you really want to know. But now he's back on his manor, not chastened by his experience or humbled, but angrier and madder than ever.
Baz is now living back on Queensbridge road near the Holly Street estate, this is a freindly warning to all those thinking of buying flats in them new blocks at the Dalston end, DON"T BOTHER. I said it before and i'll say it again, YUPPIES OUT OF HACKNEY!!!!
Some people think it aint ok for Baz to act like a thug, to swear and shout and headbutt fences, they think he should be a noble and dignified member of the working class, a neighbour they can boast about being friends with at their dinner parties. They don't like it when people stand outside pubs shouting, huddle outside bookies smoking fags or have barbeques on the balcony with old rave classics blasting out from inside....they dont like it and think everyone should subscribe to their dull values and turn the whole East End into Crouch End, well it aint happening! And i'm sorry to disappoint our middle class readers who would rather all depictions of the working class were flattering and nice, but I AINT NICE and never will be. So you better fuck off cos i aint goin nowhere!!!!!!!!!!!!!!!!!
One more thing, Baz has been getting letters off people asking if he is a Nazi or fascist or in some way related to the BNP. The answer to all you lot is FUCK OFF, if i catch any of them Bigots. Nonces. Perverts round here i will stamp em out personally. I did have a look at that list when i was inside and i can tell you now there's none of them weirdos still living in the E8 area now, but obviously i wouldn't have had nothing to do with that what with me bein otherwise indisposed and all that. Right, laters.
Posted by Barry Squiggins at 13:14