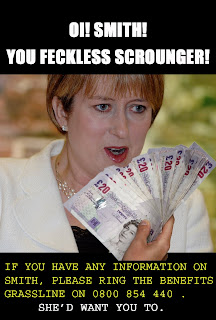 "We know the powerful deterrent effect of interventions like ASBOs, ABCs and Parenting Orders on an individual’s behaviour. As the National Audit Office has found, two-thirds [65%] of people stop after one intervention – and all but 7% clean up their act after a second and third intervention.

That’s still too many. And what’s more, that’s the 7% who commit the majority of all anti-social offences.

In Chorlton Park in Manchester last summer, the council and police worked with dozens of separate agencies to crack down on all aspects of ASB. I now want the Action Squad to co-ordinate a new drive against the hard core of ‘hard nut’ cases.

If persistent offenders know they’re able to get away with it, then they will – by definition – persistently offend. They will try it on again and again.

We need to send them a strong message that we’re not having it – that there’s no room for that sort of behaviour in our communities, and that there are tough sanctions for it."

We think that in this case it's very hard to disagree.