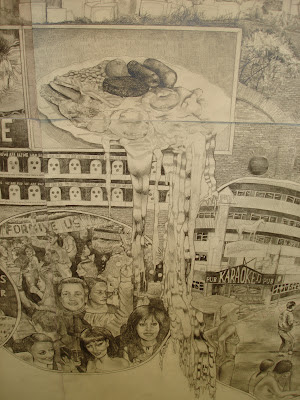 OI, THIS IS SLANDER, I AINT HAVIN IT!!!! The name's Barry, yeah, i admit that, other similarities purely coincidental.


Baz is on his fourth when that fuckin puff George Micheal comes on the bleedin juke box. Oi,! He grabs Janet as she bumps past with a Bacardi breezer, I said OI! You better not hav put this SHIT on with MY FUCKING MONEY! Oh shut up you daft bastard she says, arms wrapping round his shoulders, Baz aint havin any of it and he pushes her right off sending her reeling back colliding with some ol;d cunt with a tray of drinks. Alright Barry my old son, fuckin cool it alright, this is miserable fucker John the landlord saying all this leaning across the bar all conspiratorial like. Don’t take the money if you don’t like people getting lairy Baz thinks but he don’t say it cos he wants another one. I just ,don’t ,like ,that, fuckin ,puff, on ,in ,my PUB!
Next thing they’re bundling home, Janet pissed and holdin his hand, wobbling and screeching outside Mecca Bingo. He aint been with her long, biding his time really til something else comes along, but there don’t seem to be much doin so he hangs around, aint letting her move in though, FUCKIN LETHAL that is when you let em move in. Oi get a move on she shouts weaving across the pedestrian crossing making a black cab brake and catapult its passenger into the plexiglass. He aint in no hurry, the mood’s gone now, he looks at her and thinks, you scrawny old smackhead I’d rather have a kebab. I’m goin down Acropolis, you comin?
A slow stagger through the chicken bones of the High road and they’re stuck side by side on the bench in the kebab house, Baz stands up and starts pacing, it don’t do to act DOCILE in these situations, I mean let’s face it they’re all the same piss taking foreign bastards. There’s some dodgy nightclub down the stairs, he went there once with one of his mates on a mission to pick up some gear from some Russian bird. There’s whole gangs of them Russians in there, tooled up, it don’t seem right them taking over, even in the fucking kebab house.
Janets sighing with her eyes shut moaning about wanting to go home, sometimes he just wants to SLAP her ABOUT. I wish you’d just give it a rest once in a while he says sparking up a B and H. Gis one of them she says holding her hand out, he’s never liked a bird that begged, everyday she reminds him more and more of some horrible whore from Commercial Street, he throws the cigarette at her and carries on pacing.
Whatyou got the hump about?
THEM CHIPS READY OR WHAT PAL?
Baz’s tone alerts the blokes hanging about at the back, Alright alright no need for the fuckin heavy mob mate is there I was just asking when me chips are ready.
Posted by Barry Squiggins at 17:02