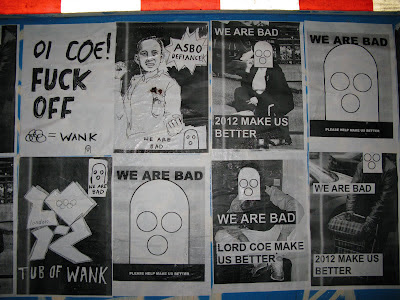 The WE ARE BAD collective has made it’s first incursion into the Olympic zone. The blue perimeter fence has been lacerated with a howl of denial.
We refuse to feel guilt, we deny everything from the nations ailing health to the ruination of the planet.
London has always been known for its rowdiness, rioting and boozing. Bataille talks about an economy not of conservation but of waste and expenditure. These are the counter narratives of the city, the Rabelaisian splurging, drug taking, blowing a weeks wages in one night. All historical attempts to eradicate it have failed.
In the 1860s thousands of the poor were evicted from slums perceived as dangerous, their poverty made them likelier to rebel and riot. The destruction of the ‘rookeries’ did not erase the poor but dispersed them, thousands of little rookeries cropped up all over in unexpected places. The attempt to repress leads to uncanny rupturing, the accursed share, nothing divided neatly but always a remainder, something that can’t be rubbed out.

There is a new puritanical regime in place.
Yuppies in Surrey squander energy heating huge homes, driving four by fours, buying new consumer goods and taking city breaks but it is the working class whose lifestyles are being legislated against. ASBO’s, responsible drinking campaigns, sanitized football terraces and smoking bans are all an outright attack on working class culture. Since when has middle class people laughing at the poor and using derogative terms like chav been acceptable? The new puritans despise the working class and use a strategy of guilt to bring us into line. Ever get the feeling we’ve been here before? 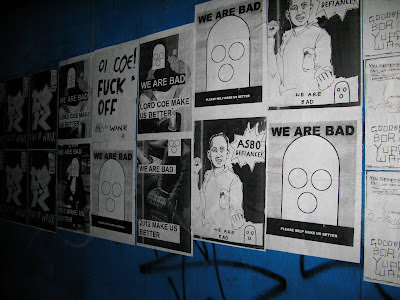 “Licentiousness and debauchery, sex as ritual and visceral thrill, feel it played out here, the Saturday night bacchinelean revels, unruliness and binge drinking, all those ancient rites so detested by our leaders, legislated against in anti social behaviour orders. But the paths are well worn, these ancient tracks are ours, the impulse is etched deep, atavistic. These New Labour gestures are flimsy, superficial, they slide off the register like the jokes you get in Christmas crackers, read out once to the bafflement and grim bemusement of an assortment of guests and cleared away and cast out when the meal is over.” Savage Messiah zine issue 4. 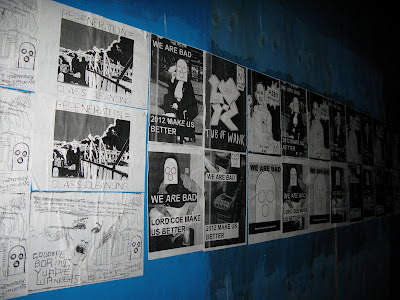 Labels: Hackney Wick, WE ARE BAD