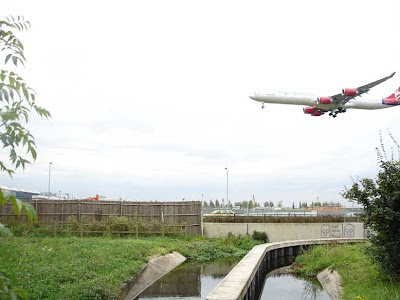 We have traced the ruins of Post Modernism along the flight paths radiating from the Genius Loci of the Airport.

The Airport has shifted from the once ultimate post-modern experience, a non-space in which all sense of time and place was suspended, to a locus of struggle and Conflict in which all the anesthetising tenants of postmodernism have been shattered.

Al Qaeda as they sat suspended in the placeless and timeless ambiance of the departure lounge understood in an instance that they where the first truly post-modern fighters, decentered and Deterritorialised, detouring the ultimate symbols of modernity, the airplane and the Skyscraper, in order to puncture simulacra so deep that the momentary stench of the rotting flesh of the real was revealed. A stench so strong that only a new paradigm could mask the scent. A paradigm that would lay waste to post-modernism and aim for our own ideological mobalisation in its support.

The Airport has become the flashpoint of contestation from climate change, terrorism, surveillance technologies, immigration and the transfiguration of the future body.

The We Are Bad Collective are engaged in experimental research exploring the lines of flight connecting the Airport to the ruins of Post Modernism.
Posted by .rupture. at 12:05