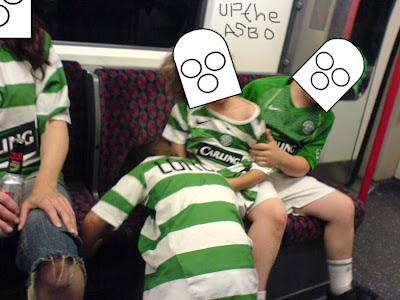 Ayup you lot at We Are Bad am just writing in to let off some fucking steam.

A got home t’night to find a letter stuffed through mi letterbox from that useless bunch of corrupt cunts, HackneyHomes. The letter asks us to spy on kids who play out on Estate.

They’ve sent us an Anti-social Behaviour Log Book and are asking us to keep a log a what the kids are up to, so they can get an ASBO on em to stop em from playing on the estate. Since when wor our kids playing out and doing normal kid stuff like riding bikes, running around, and playing footy, Anti-Social!

Its orreight for middle class parents on streets round ere who’s got money to send their kids to kapoeira or paying for a tennis coach and all that, but when our kids kick a footy abart its anti-fucking social! Fucking Ollimpics will chang nowt. Posh kids wi loads a cash who’s daddies taxi em abart in gret 4X4s will get to use the expensive Olympic sports centres whilst our kids get ASBO’D.

Thing is right, that a lot of the oldies who live in tower block are scared a kids, and it’s a real shame. They read all this shit in paper about hoodies and gangs and then when they see a bunch a kids running round playing IT, they barricade themselves in with big iron security gates. Thing is wot nobdy sees it that having the kids out meks the estate safer for every one. A remember when kids where too yung t’play out on their own, the estate was a much more threatening place, all quiet wi nobdy abart. One night one a oldies got mugged right outside our kitchen window and nobdy saw ouwt, another time one a oldies had their pension robed on way back from post office. There ant being a mugging on estate since the kids got old enough to hang out. All them eyes running abart is the best sort a neighbourood watch.

Thing is, if they get the ASBO it’ll force the kids to stay in flats, and am telling your most violence is in the home, and aving kids under feet all night will be murder for everyone.

And you know what, aving kids having t’stay indoor playing playstation and watchin telly all night will mek em Hyperactive. Then some knowit-all shrink from’t school will give em some fucking label like HDAH and force Ritalin down their necks.

A think that ASBOs are an attack on our kids as a result of the prejudices that come from people who carefully network their kid through expensive after school clubs so they don’t have to mix wi our kids and supported by the irrational fears of the elderly who have already had their freedom stole by the self imposed incarceration promoted by a hysterical media.