A massive rubber plant got smashed into the wall. 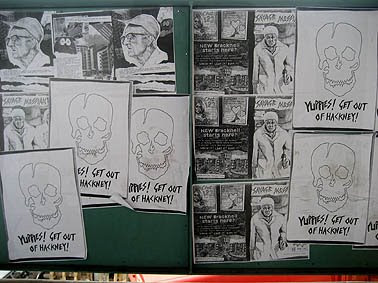 Anyway, on with the story about working links. Yeah the whole thing started out pretty huliliating for Sean, he looked, well the only word i can come up with is 'humble' and that just aint Sean, i mean Sean with the fight knocked out of him just aint Sean, he's just this sad looking middle aged geezer lookin sort of broken, you know, like he'd given up. So aside from being fucking angry i was actually quite upset i don't mind tellin you. Gaynor the hard faced fucking screw was goin on at him about training and opportunities. I just laughed in her fucking face, you want him driving his old mates from Belmarsh round in a bleedin Serco van yuo dopey tart i said. But no she was bleating on about how he could easy get a job as a security guard or some such shit.
Sean are yuo gonna take this, are you gonna let her push you around like a little kid i says to him. Sean just shrugs like it don't matter.
So off we go, down the Kingsland road to this poncey new office where they got all these happy pictures on the windows of people on the phone talking to each other, yuo aint never seen such wank. We get to sit down on these nice orange corner settees, its a bleedin joke.
Anyway this geezer strides over, some big bald bastard with a smug grin and i'm thinking yuo might think your a big shot in here sunshine but wait til you get outside. The smug git says oh Mr Hanlon, good to see you here early for yuor interview, we've got coffee over here and the papers here. Gaynors smiling and Sean just sits there. The dole sent the letter about getting sent down here and Sean chucked it in the bin, Gaynor got it out again and she said if he didn't come down here that was the end of them. Sean pal, what are you playin at?
So he sits there drinking this plastic coffee shit from the machine and reads last weeks hackney gazette until the ugly bald prick comes swaggering over and syas 'ok Mr Hanlon, come with me please'. Its all open plan in there and you can see and hear everything the smarmy fucker has to say. He's going on and on about retraining, new skills, how Sean could improve his chances if he changes his attitude. i'm thinking any minute now i'm gonna lose it, i can feel the rage boiling up, and then i hear this almighty crash and its the chair Seans been sitting on go flying across the room, then i stand up and i sees him picking up this bin ready to hurl it at that disgusting smarmy nonce. But then this security guard is there, they always have em lurking at the back and he's trying to work out wether to grab Sean or not cos he knows Seans fucking massive and completely mental. And so he hangs back while Sean picks up this giant rubber plant and throws it against the wall. I think Good on yer son, thats the sean i know! Gaynors shrieking and tries to restrian him, i get old of her and i syas fuck off you, leave him the fuck alone. Come on Sean. I want to get him out before the old bill get here, c'mon Sean i say, we gotta get out of here pronto, c'mon mate........to be continued.
...............find out what happens when Baz and Sean hide out in the matrix of backstreet boozers between Shoreditch and Dalston.
Posted by Barry Squiggins at 15:01