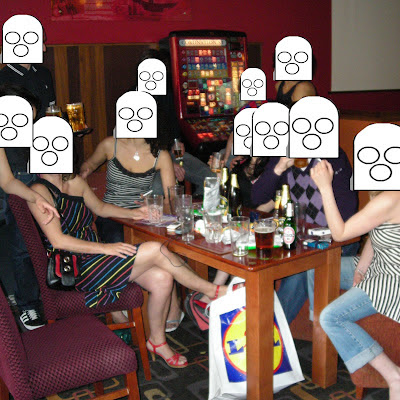 Alright so i grabs hold of Sean, an i says look pal, yuo've made yuor point and we get the fuck out of there. Gaynors shoutin and makin threats and lookin cosy with the knobhead security they got on there, she'll be quite happy to be giving them all the fucking names, date of birth an all that stuff, cos she's one o them aint she, aFUCKING SCREW!!!!
but they don't try to nick him, you can see he's acting like a proper psycho..they let us go, thinking yeah we'll go round in the van and pick em up later when they're watching Countdown with a can of special brew. well fuck that. We're weaving through the estates of haggerston, by the canal and then into that little maze of flats on Whiston road. that whole estate is fucked, they got the orange sitex up all over the windows that Hackney council slap up over everything until they can sell it off to private developers.
i got a few boltholes round here, most of em i aint even told Sean about cos he seemed to be telling that horrible Gaynor the lot at one point. C'mon mate i say and we nip into the Acorn for a swift one. Some of you might know the Acorn on the junction of Whiston road and Queensbridge, its a bit of a shithole but me mate Kenny drinks in there sometimes and some of the lads from the old Charlie Wrights days so i go in now and again. the old boys on them motorised spac carts moaning all the time do my head in a bit but still its an alright boozer, they aint got much time for the old bill in there.
Kennys bird Linda used to live in a tower block over the road which is now a massive yuppie complex. I'm thinking fucking hell don't get Sean started on that cos i'm just tryin to get him calmed down. Anyway Kenny says we can doss at his for one night but thats it but after that he says he's got a mate out in Leyton who'll put us up for a day or two. There's also me brother in stratford , he's got a big house near Maryland overground station and the lock up where i do me painting so we've got loads of options, i don't feel so bad as i'm supping me Stella.
That cunt Edmonds comes on the tv, deal or no deal,waht a righT load of Wank!!i'm on me third pint and i'm in the mood to smash the tv but i got to think of sean and he's lookin a bit happier, bit less aggro, can't have him kickin off if we're goin back to Kenny's.
So i'm happy, mocking that cunt Edmunds on tv, supping me pint, lookin forward to curry and a few tins round at kennys when this bird walks in..i've seen her before at the Dolphin, this stringy blonde with out of focus eyes, it looks abit like the thing gaynor brought out wiv her one night so i do a sharp double take but it aint her. No this one has a familar look but only in the way them smackhead birds all look abit alike with the too fast walking and face a bit stretched. But anyway i glance over at Sean an he's suddenly come to life, sitting up straight and staring right over at this bird. i'm thinkin, well she werent that bad, i might have had a go meself, but Sean well its always a dilemma aint it...it might send him round the bend or it might take his mind off Gaynor...god knows..but she's sitting at the bar now drinking some blue fizzy shit looking over.
to be continued.............
Posted by Barry Squiggins at 08:19