SOMEONE GOT PAID A LOT OF MONEY FOR THIS ...AND IT WAS WORTH IT 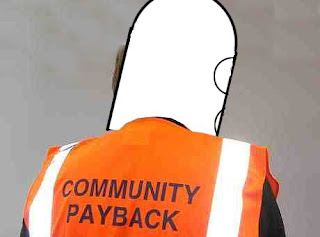 Is there anything that sums up the new labour project better than this? No doubt it took tens of thousands, but some copywriter got it in one. "Community Payback" is perfect.
We've got the rounded vowels of "Community" - that soft "U" standing in for the social worker, or someone else sounding oxbridge and professional. Also, who is going to disagree with "Community"? Sounds better than "group of people in the same place and time who have to share the same amenities". This fits in with the eco-friendly, cary-shary ethos of the 90's(the wall has gone, and everything else, so let's make the best of it). Specifically 1997.

The point is, some cunt telling us that we're a "community", therefore we should love that label pasted on us from on high. They're doing it for us! This is not the state imposing unpaid labour on the miscreant (interesting that they didn't ditch the "labour" bit from their name)

This is done in our name. If you happen to live somewhere, apparently your views and aspirations are the same as the property owning classes who live next door. That is new labour community.

Anyway, the word "payback" is fantastic. To whom? At what rate? We are not referring to errant bankers here. Those hard consonants contrast beaufully with "community". there is an assonance between the more open "pay", and the sharpness of "back" ( the clawing back of that which is 0wed). The closing of the palate and concommitant bearing of teeth. So in terms of vowel sounds, we have the openness of "community" which is contradicted by "payback". Just say it, it is the phonic equivalent of New Labour.
Posted by robin_bile at 23:36