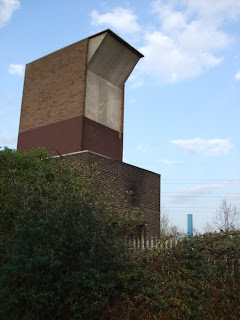 "Space and light and order. Those are the things that men need just as much as they need bread or a place to sleep." (le corbusier)

i'll settle on the sleeping bread, thanks. dysfunction autodidact. machine housing is gaunt edwardian, fat went to the town hall, beaux-arts; it's swelling cupola bulks over the belt of road. panacea to urban discharge, conjured by industry. institutional tiled staircase, reminder of the spike. however intended, three generations per unit.

air got cleaner, though canal remained a poisoned sump. Conduit for stormwater, sewage overspill. victorian romanesque arches dripped, soot blackened rivulets of corrosive rain. The viaduct was an aqueduct with rails. It strode across the poorest parts of town, between each brick footprint a small workshop. Light but dirty industry, cash transaction. Small empires rose and fell beneath the skeletal gasworks
Empire dwindled, and with it, decoration. The post war settlement yielded prefab units, to ward off revolution.

whilst boomtime bubble spec bred lamped fanlighted boxes, raw orderly cul-de-sacs, the entablatures of workshops were restored. Obsolescent meant “period”. wood floors, for those who could afford to heat. Warehouses of taste, sprung from the beige interior of sweden. No corners moulder, storage everywhere. The offer of a sleek mastery, at a reasonable price. To have money, now, meant to have nothing on display.

Frontiers rolled back. The west gestures, floats on a raft of laminate flooring. Waves it’s shirt at it’s own rescue ship (and finds itself the first to rescue). beech effect. No more to suffer the entrenched inefficiency of the public sector. Labyrinths of paper. A bright future, flatpacked.
Posted by robin_bile at 13:28