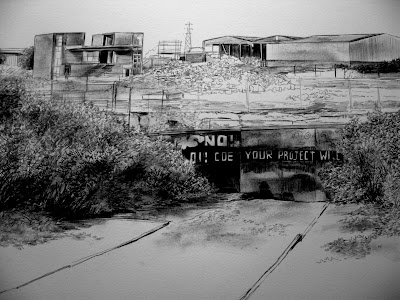 March 14th, 4-6pm Hales Gallery . ‘London 2013:Drifitng through the ruins’
Issue 11 is a drift around the Olympic zone and focuses on a particular moment in the build up to the June the 18th Carnival Against Capitalism riots in the City of London. The riots happened in 1999 and were a protest against the ludicrousness of the global financial system. The zine was written after a day of walking around the perimeter fence of the Olympic zone In March 2009 and is a direct response to the mass destruction of the Lower Lea Valley.
The launch will be followed by a trip to the Blade Bone public house ( now Noodle King) on Bethnal Green road and a pub crawl round the East End.

“I found the pub soon after that. From the outside it looked ordinary, an estate pub from the late 60s, early 70s, something of a bunker with fortress windows at the front, plastic hanging baskets and St George flags all over it. I thought at first the old man must have got the wrong place but then I could hear the thudding of the sound system inside, the frantic bpm and chaotic vocoder yelps. As I got closer I saw all these skinhead types outside wearing tie dyed t shirts and temple of psychic youth symbols tattooed on their arms. There were groups staggering about lighting fires and breaking palettes. This party was the continuation of a Saturday all nighter at one of the massive abandoned factories on Carpenters road. They were all off it, topping up on psilosibin after a big weekend of acid and flyagaricks.” Savage Messiah March 2009
Posted by Barry Squiggins at 21:28