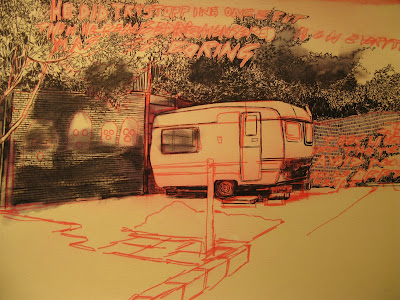 SATURDAY APRIL 11TH, LONDON: SAVAGE MESSIAH WALK AROUND THE CITY AND ISSUE 11 ZINE LAUNCH.
Walk. We will be walking around the city of London and drifting towards Housmans where we will be having drinks and showing films to launch the ‘zine. Meet at Dirty Dicks Public House, Liverpool Street 3pm.
Launch.
Housmans Bookshop, Caledonian Road N1, from 7pm.
Issue 11 is a drift around the Olympic zone and focuses on a particular moment in the build up to the June the 18th Carnival Against Capitalism riots in the City of London. The riots happened in 1999 and were a protest against the ludicrousness of the global financial system. The zine was written after a day of walking around the perimeter fence of the Olympic zone In March 2009 and is a direct response to the mass destruction of the Lower Lea Valley.
“I found the pub soon after that. From the outside it looked ordinary, an estate pub from the late 60s, early 70s, something of a bunker with fortress windows at the front, plastic hanging baskets and St George flags all over it. I thought at first the old man must have got the wrong place but then I could hear the thudding of the sound system inside, the frantic bpm and chaotic vocoder yelps. As I got closer I saw all these skinhead types outside wearing tie dyed t shirts and temple of psychic youth symbols tattooed on their arms. There were groups staggering about lighting fires and breaking palettes. This party was the continuation of a Saturday all nighter at one of the massive abandoned factories on Carpenters road. They were all off it, topping up on psilosibin after a big weekend of acid and flyagaricks.”
Laura Oldfield Ford Savage Messiah Issue 11. March 2009

“The lessons drawn from dérives enable us to draft the first surveys of the psychogeographical articulations of a modern city. Beyond the discovery of unities of ambience, of their main components and their spatial localization, one comes to perceive their principal axes of passage, their exits and their defenses. One arrives at the central hypothesis of the existence of psychogeographical pivotal points. One measures the distances that actually separate two regions of a city, distances that may have little relation with the physical distance between them. With the aid of old maps, aerial photographs and experimental dérives, one can draw up hitherto lacking maps of influences, maps whose inevitable imprecision at this early stage is no worse than that of the earliest navigational charts. The only difference is that it is no longer a matter of precisely delineating stable continents, but of changing architecture and urbanism.” Guy Debord
Posted by Barry Squiggins at 16:38