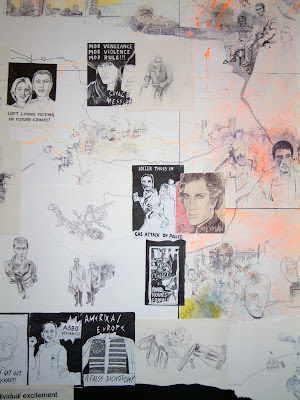 As soon as I spy The Stag on the corner of Fleet road I’ve crossed an imperceptible boundary that takes me beyond the grasp of affluent Hampstead and into a realm of inebriation and spontaneity. I pass the council yard on Cressy road where a multitude of sweepers are setting out to know every contour of the Fleet valley. The subterranean river asserts iself in street signs.

I pause to call on a lost acquaintance in Polgrave house and push through amusement arcade kitsch, tainted nets and falling dreylon. There’s a cat in the communal launderette dozing between geraniums pots.

This place is a nest of junkies, the dank pain of boredom spans the threshold.
I haven’t been here for 9 years but everything’s the same, even the scorched teaspoon on the gas fire is still there.

I drift out of those flats with that dislocated feeling you get when you emerge from a matinee, and suddenly feel a deep nostalgia for those film noir treble bills at the Everyman. In 1960 a film called Peeping Tom came out by Michael Powell,it was about voyeurism,the ubiquitous eye and covert surveillance. The main character was a TV studio serial killer who prowled around Hampstead secretly filming people.

I pass the hysterical darkness of Party party, a day glo explosion of glitter balls, balloons and Killer Clowns from outer space.
The Gospel Oak estate is a nexus of brutalism. There’s a warped Cartesian logic at work ,an attempt to eradicate the erratic flare ups of the street. Got to keep moving to escape the striations of control. Taking photographs risks being hauled in for enforced DNA swabs.
Posted by Barry Squiggins at 19:59