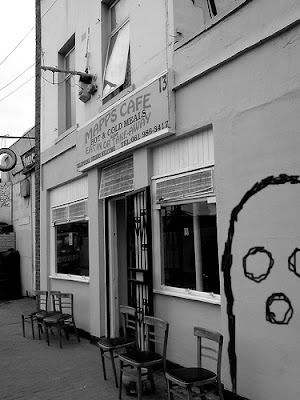 Fuckin hell, what a night, i aint jokin, Sean went MENTAL! He was headbutting fences and smashin stuff up and i had to grab him and wrestle him down and say look Sean, focus mate, its all about focus! ha ha ha. Anyway, i didn't want him dragged straight back to the nick after tasting freedom for about an hour an a half so i says look Sean, lets go an have a couple of jars, there's still one or two of the old haunts left, so we go to the top o the mornin and i get him a couple of jars and we start plotting. Seans up for a bit of aggro, so am i but i say look Sean we need to get the crew together, do it PROPER! Sean starts laughing and lighting matches in the pub with that manic gleam in his eye, he's fucking livid he can't smoke a fucking b and h with his pint.
Anyway, he's up for a campaign rather than a one night wrecking spree, which is good cos Sean seething and pacing in Belmarsh just aint good for his nerves.
Anyway so he calms down a bit and we get some of the old crew down there and Sean draws all these maps on beermats and starts doodling this weird head and then opens a plastic bag with loads of tins of spray paint and he's off round his old manor taking back his territory and promising revenge and i think good on yer son, it takes guts to fight back like that.
Anyway this morning we had our first proper meeting of the old crew in the mapps caf,Sean fuckin loved his first greasy fry up for 9 years, and i tell you, those cunts Jowell and Coe are gonna wish they'd never fuckin set foot round here, I"M TELLIN YEER!!!!!!!!!!!!!!!!!!!!!!!!!!!!!!

stay tuned in for the next installment, amidst the chaos of trying to destroy the blue fence Sean tries in desperation to pull a female scurity guard and succeeds.........
Posted by Barry Squiggins at 08:18